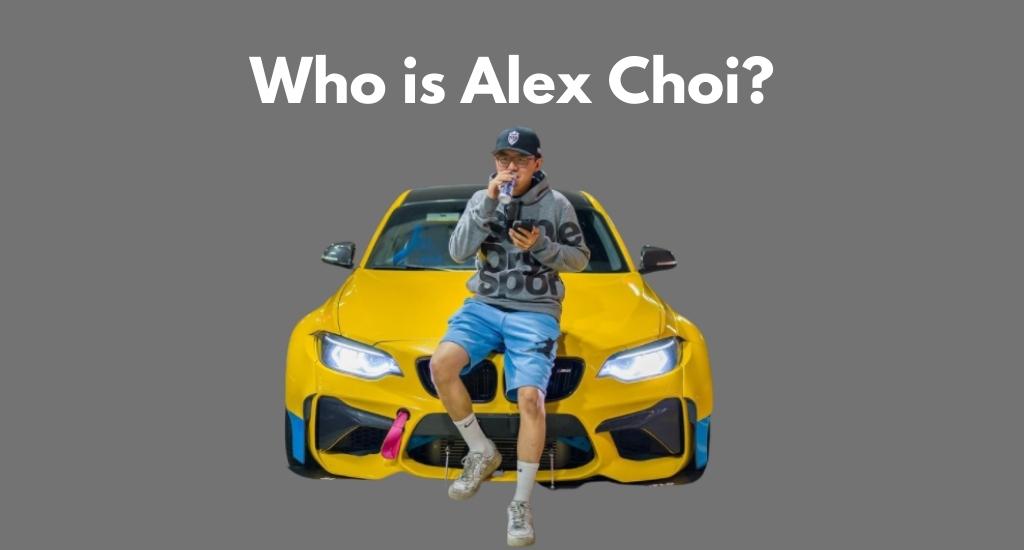 If you are obsessed with supercars, there is no way you have never heard of Alex Choi. Alex is a sensational South-Korean automobile YouTuber based in the United States. He is particularly known for his unconventional tastes and unique car customizations.

Who is Alex Choi?

Alex Choi is a lot of things related to automobiles and supercars. He is a stunt driver, a car enthusiast, collector and most of all he is a professional YouTube celebrity.

He joined YouTube in July of 2017. His self-titled channel contains various videos about automobile modifications and car customizations. He also has a lit Instagram account where he makes regular posts about supercar modifications and such.

Where was Alex Choi born?

Alex Choi was born on October 25, 1999, in Seoul, South Korea. His parents were pretty well-to-do and had a high income.

When he was young the family immigrated to Los Angeles, the US where they are still living. Alex has dual Korean-American citizenship. It was also after coming to LA that he started showing interest in automobiles, and thought of trying out to be a YouTuber.

Unlike the stereotypical Asian Parents, Alex Choi’s parents never nagged him to become a successful lawyer or engineer. They even supported him to buy cars for his obsession.

Alex’s first automobile was his mother Mercedes, which he drove off to show off to his American friends. Unfortunately, he crashed it on his first day while doing a very dangerous stunt. After the crash, he was never scolded by his mother. Instead, she would ask him whether he was okay or not.

Later his mother gave him the funds for his new celebrity career. Initially, the first cars that Alex used to buy were for Instagram. He had a very large fan base from Instagram that transitioned to his YouTube channel in 2017 after he made his first video titled “Fiat 500e DRIFT CAR build.”

Alex Choi first appeared on Instagram. Subsequently, he started a YouTube channel under his name almost a year after in 2017. His videos had garnered a lot of fame and recognition from automobile enthusiasts from the rest of the world. Alex came from a wealthy family and he got the opportunity to use that wealth to showcase luxury cars.

In 2018, Alex was jailed for some time since he collided and almost killed a motorcyclist while streaming a dangerous illegal stunt show in LA. After he was released, he uploaded a video complaining about the fact that the police seized his car and sent him to jail. Alex was criticized by the motorcycle committee after this.

His latest video titled “Lamborghini Launch Control Reaction Compilation” has a total of 10 million views until now. A popular automobile model, Emilia Hartford has appeared in many of his YouTube videos.

Ever since he was a child, he had an undying love for cars. In fact, people often feel jealous of the fact that Alex showers all the cars in his collection with love, and knows every detail about them.

Recently there have been rumours about him being in a relationship with automobile model, Emilia Hertford. They were captured together on countless occasions at dinners and outings. They even post pictures of each other on social media.

Emilia has even appeared on many of Alex’s videos. While this could be the indication of some sort of romance between them, there are no proves or official statements regarding this. They might even be good friends.

How does Alex Choi make money from Social Media?

Alex has been a famous personality in the YouTube world. Many of his videos have gotten past the one million thresholds. Like most other YouTube professionals he makes his money from the Google AdSense Program.

The program allows commercials on the video and a percentage of the commercial money goes to his pockets. He has also made a lot of money from sponsorship branding and affiliate programs.

In addition, his Instagram account is also a great source of income, by teaming up with different motor and shopping brands that pay him a portion of money for each clicks through the affiliate marketing system.

Throughout his YouTube career, Alex has been subjected to many controversies. One of them was when he almost hit a motorcyclist while doing a risky stunt. The motorcycle was only a few inches close to an extreme accident. The motorcyclist’s girlfriend, who was not on the bike during that time, launches a couple of complaints against him.

He was also subjected to several jail trips due to stunt shows that were termed as illegal by the local LA police authorities.

It has to be noted that Alex got his initial funding from his parents who had a pretty high income in society. Each of his cars is worth around a few hundreds of thousands of dollars. For instance, his favourite customized Lamborghini Huracan can sell for a price of more than $180,000.

As a rising YouTube star, he has a lot of liquid and fixed assets. Now at the tender age of 22, his total assets are estimated to be around the value of 1 million USD. This comes from both his YouTube career and Instagram account.

What are the three factors that helped Alex reach his current heights?

The success Alex has is achieved due to these three factors from his life:
-The people who support him.
-A pastime that can be monetized.
-A life that is meant to be enjoyed.

Alex made his first video and published it on YouTube in July 2017. It was about a Ford drift driving test.

How many Cars does Alex Choi have?

How many times has Alex Choi been to Jail?

Alex has gone to Jail twice. The first time he was there because of illegal stunt shows. He went to jail the second time because he was caught not complying with the law authorities. Both of them happened in LA.